Somewhere along the creative canal in boating evolution, someone was bound to come up with an idea that just breaks all the rules... and begs the question: What the float?

Now, we've seen some motors pushed forward as seen by the folks at Hupp engineering and many others in that elusive attempt at faster planing... but this has to take the cake. 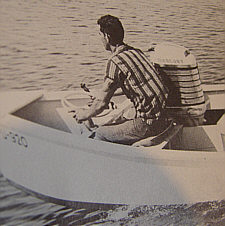 Now, let's think about this for a moment. What's the plan here? Put the motor up front, Check. Go fast, Check. Turn, Check... Get thrown out of the boat while the craft makes a nice side-step towards better waters?

We catch up to our hero JACK here in kat-fishun country where he's testing out his new idea in boating, the Katfish Kecher 2000! For this historic moment, Jack has chosen the largest outboard (or is that inboard) of the day, the Dockbuster. "Yep, She's more than 200lbs, 6 cylinders, 3 carbs... 70 horsepowers of rip-snortin' 2 stroke tower o' power! Heck yea, she weighs more than the boats does... Ewwwweeee!" Jack said. 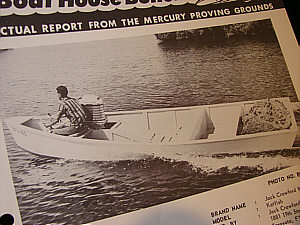 Eye witnesses claimed that there were passengers in the craft but all fell overboard. Only Billy Sue made it to shore to tell the tale. She said they gots dizzy when Jack gave 'er some gas. (probably something to do with exhaust inhalation... who knew?)

Local bait...  Um, shop owner, Bessy Ann Cooter, said she thourght that Jack tried to turn around and help them but when he did, catastrophe struck.

The next day, a local paper reported a ghost boat traveling at a high speed. Evidently, it cut through a fish hatchery and did a number on many catfish.

The boat was last seen heading deep into the swamp at high speed and Jack was reportedly eaten by Chompy... the local swamp thing.

Until next time, this is back road reporter Kal saying "watch out for the floaters."

We have 8917 guests and 4 members online